My ISP is offering IPTV with a set-top-box (STB) device which is connected to the provider network and the TV itself:

The only “user interface” for the STB is the remote control. I was curious to find out if the traffic between the STB and the provider is encrypted, so I decided to see what goes on the wire. The easiest way to do this is to create an ethernet bridge between the provider and the STB and then capture the traffic. I used my MacBook with a second USB Ethernet adapter. In OSX, an ethernet bridge is created like this:

I used Wireshark to capture the traffic and to my surprise there was no encryption at all. They have been using RTSP to switch between TV channels:

Every channel has unique ID like ch12032017033910402807. The ISP is also offering some paid channels (like HBO) which I am not subscribed to. However, I managed to find the complete list of channel IDs in the traffic dump, including the ones that I am not subscribed to. In other words, the entire security for the paid channels is done on the client side (by the STB) instead on the server side. And you can watch every channel as long as you know its ID.

At this point my first idea was to replace the STB with my own computer which can talk their protocol and play the entire set of channels. However, that would be a lot of work which is not fun doing. A better solution would be to create a man-in-the-middle between the STB and the provider which can modify the traffic and thus substitute some crappy channels with the paid channels. What a great opportunity to use my old Raspberry Pi!

The classic MitM with ARP spoofing didn’t work out because there was MAC filter on the provider side. Long story short, I created my own tool nfqsed which can transparently modify network traffic using a predefined set of substitution rules. I used my USB Ethernet adapter to turn my Raspberry Pi into an ethernet bridge. The built-in network adapter is connected to the provider and the USB adapter is connected to the STB. This is how it looks like from the top: 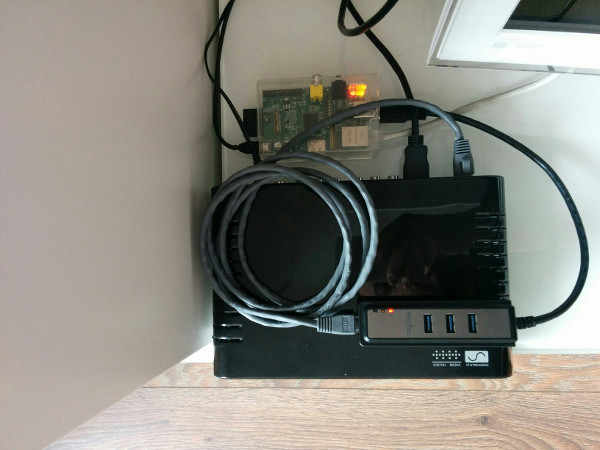 Below are the relevant config files on the Raspberry Pi which setup the networking and configure nfqsed to replace one TV channel with another: