The air pollution in Sofia is really high during the winter, so I decided to buy an air purifier for my home. After some short research, I bought Philips AC2729: 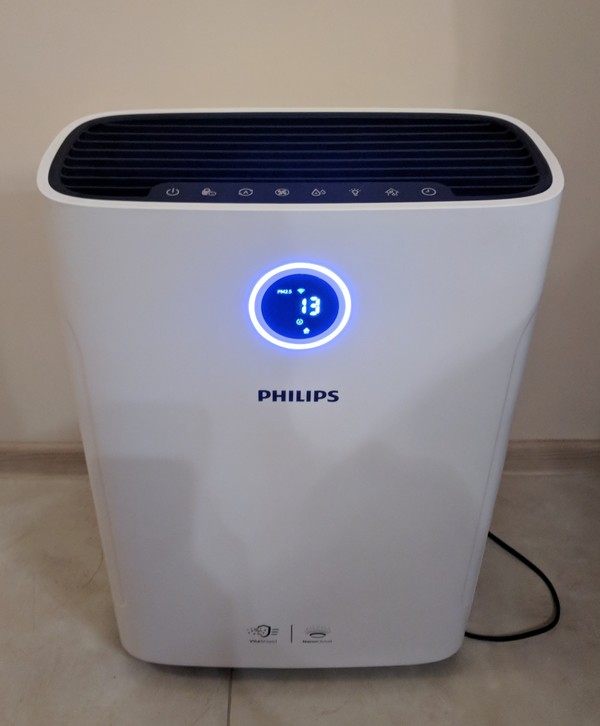 it can purify and humidify the air at the same time, show particulate matter (PM 2.5) / humidity, and features quiet sleep mode. It also has a Wi-Fi interface which allows remote control with a mobile app. Being able to control the device with my phone sounds pretty cool but after reading so many stories about the so called Internet of Shit, I thought it’d be a good idea to inspect what kind of data this thing sends and ultimately create my own tool to control it. It’d be a fun side project as well :)

The first step of course is capturing the network traffic that comes in and goes out from the device. There are several ways to do this with a PC and good Wi-Fi adapter but I took advantage of the built-in packet sniffer that my router has and recorded the traffic during the initial setup of the purifier and some interactions with the mobile app. Then I opened the recorded .pcap file in Wireshark and quickly realized couple of things:

I can easily disable the phone-home functionality by putting a firewall rule in my router and limit all traffic to my local network. But I also want to understand how the device is controlled and for this I need to decrypt the network traffic between the purifier and the mobile app.

Let’s take a closer look to the initial interaction between those two parties:

The first request to /di/v1/products/0/security is plain text and it seems to be a Diffie-Hellman key exchange (truncated by me for readability). The following requests are base64 encoded and decoding them doesn’t produce anything meaningful. So it looks like a secret key is exchanged at the beginning and then used to encrypt further communication. There is only one way to verify this theory – reverse engineering the mobile app!

The mobile app is Air Matters and I downloaded its Android version which is an apk file. Then I used the jadx tool to decompile it. With a few greps over the decompiled sources, I found the relevant encryption/decryption classes:

With this I have been able to recover the following steps:

I also found the G and P values used for Diffie-Hellman in ByteUtil.java:

However, this is not enough to find the shared secret which is being established. In fact, G and P are public values. Cracking Diffie-Hellman boils down to solving the discrete logarithm problem which is to find a value "a" such that G^a mod P=A. We already have G and P from the decompiled source and we also have A which corresponds to the "diffie" property in the network request. The shared secret is equal to B^a mod P where B corresponds to the "hellman" property in the network response. The value "a" is by definition a big random number which makes solving G^a mod P=A very hard. Let’s see how this random exponent is generated in ByteUtil.java:

It seems this random number is only 31 bits. It also seems that the person who wrote this didn’t know what he is doing :) Solving the discrete logarithm problem when a is only 31 bits turns out to be not hard at all. In fact, it can be solved for less than a second using the Baby-step Giant-step algorithm. Check out my implementation at https://github.com/rgerganov/dlp.

After finding the session key and decrypting the entire traffic, I have been able to implement my own fully-featured command line client. Check this out:

As an added bonus, it also shows the current temperature which is missing in the original mobile app :)

As I said the purifier has a phone-home functionality which is using another form of custom encryption but this time implemented in a native library. Reversing this part will take more time but something tells me it may allow doing some crazy stuff ;)

UPDATE (Dec 2019): I also reverse engineered how purifiers are controlled over the internet.